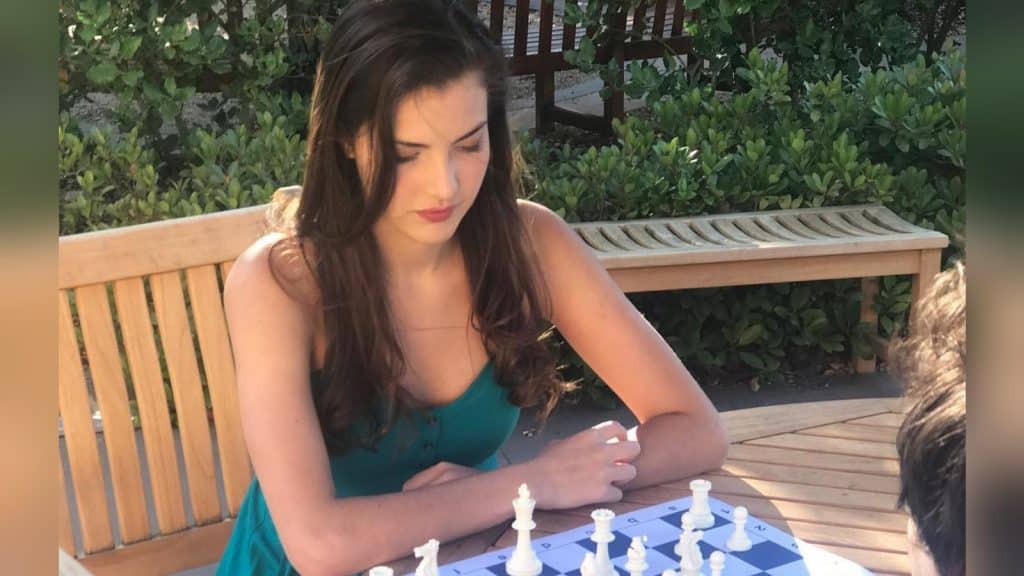 Who is Andrea Botez?

Andrea Cecilia Cristina Botez was born on 6 April 2002 in Vancouver, British Columbia, Canada. She’s the younger daughter of Romanian parents – sister Alexandra is also a chess player and YouTube star. Their father’s name is Andrei Botez, while there is no information about their mother.

Her parents fled the Socialist Republic of Romania, and settled in Canada in the early ‘90s. They then moved to the USA, settling in Dallas, Texas before Alexandra’s birth, but eventually returning to Canada.

It was the girls’ father who introduced them to chess, and the future stars fell in love with the strategic game at once. Alexandra was already making strong appearances at world championships when Andrea began playing the game – she would accompany her father and sister on their travels and started considering playing chess full-time.

Andrea began playing chess. when just six years old; the next year she took part in US Chess tournaments, and in 2010 she was crowned winner at the U8 Girls Canadian Youth Chess Championship.

played my first chess tournament after a 3 year break. Scored 5/7 and hit my highest rating of all time 😄 pic.twitter.com/ywEwjIP1rL

The following year, Andrea competed at the SPFNO 2016: U14 GIRLS and finished fourth, but in the 2016 Susan Polgar Foundation Girls’ Invitational, she was only 13th.

She is currently ranked at only 181318 place based on her rating.

Andrea and Alexandra launched the Twitch channel BotezLive in 2017. Since then, they’ve attracted over 1.1 million followers and a number of subscribers who pay a certain amount for extra content. The duo streams various content on chess, including playing with complete strangers online and in real life, but also details from their personal life, such as milking cows and goats.

The two also went for a YouTube channel, starting the outlet in April 2018, and uploaded their first video, “Worst Chess Stalemate Fails”, which now has over 75,000 views. They continued making funny and interesting videos on chess, and the number of their subscribers continued to increase, parallel with their Twitch channel popularity.

Thanks to their success, the two sisters have become two of the most popular online figures on the Chess.com platform, next to Qiyu Zhou, the WGM, and GM Hikaru Nakamura.

In 2020 the two Botez sisters signed an exclusive contract with Envy Gaming at the very launch of the organization’s creator network and ambassador program.

The two then moved to Los Angeles, California, USA, and became fully invested in content creation. They lived in the Envy Content House with other social media stars, such as CodeMiko, and JustaMinx, among others.

As of 2022, Andrea and Alexandra’s channel BotezLive has over 900,000 subscribers, while their videos have been viewed more than 180 million times.

The two are still working on new content – their most recent video, “Streamers ATTACKED by goats” was uploaded on 11 September, and has already been viewed over 100,000 times.

Since attaining worldwide popularity, Andrea and Alexandra launched another YouTube channel, BotezLiveClips, in 2021, on which they upload content similar to their chess stories, but also some details from their personal lives.

Their first video was “Magnus Carlsen being HUMBLE”, which now has just over 8,000 views, however, the sisters have collected just over 70,000 subscribers and more than 55 million views. Some of the most popular videos on this channel include “Sigma rule in chess”, which has over 2.5 million views, then “Andrea Botez wants her presence to be known” with just under two million views, and “Botez sisters had the most awkward conversation ever”, which has been viewed more than 1.5 million times, among many other videos that have hundreds of thousands of views, that have only increased Andrea’s popularity.

As of mid- 2022, Andrea Botez’s net worth is estimated at $1.7 million, acquired through her prominent career as a chess player and YouTube star.

Andrea Botez: "I Knew That I Couldn't Pronounce It."

Andrea Botez: "I Knew That I Couldn't Pronounce It."

Although always present online, Andrea rarely talks about instances of personal life that matter; this includes her love life. She has successfully hidden away her love interest, if any. According to reports, Botez is currently single and focused on her career.

Andrea is known for her charity work; back in 2020, she took part in the Zoomers Play Chess team match, through which funds were raised in support of children in need, afflicted by the Covid-19 pandemic.

In addition to her online presence through YouTube and Twitch, she is active on TikTok, on which she has around seven million likes.