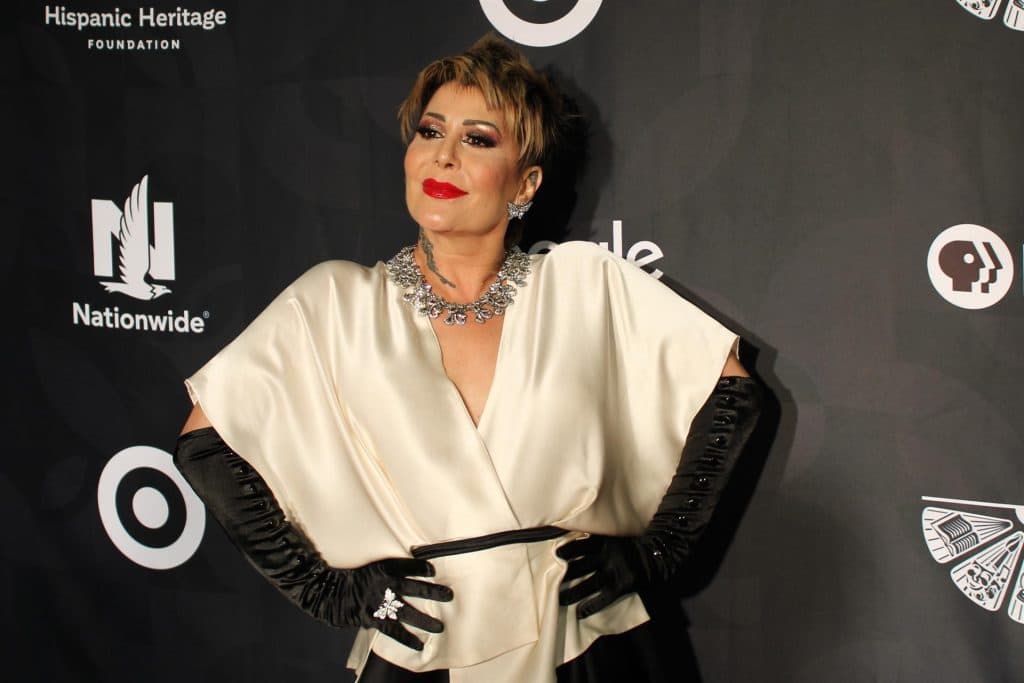 Who is Alejandra Guzmán?

Mexican actress, singer and composer Gabriela Alejandra Guzmán Pinal was born in Mexico City, under the zodiac sign of Aquarius on 9 February 1968. She’s appeared in 14 movies and TV series, and is perhaps still best known for her debut film role, portraying Claudia Rosadon in the 1991 crime comedy movie “Verano Peligroso”, directed by Rene Cardona Jr., and in which she starred alongside Omar Fierro and Sebastian Ligarde. It follows Claudia who’s just married, and who’s spending her first night with the wrong man, as they drank too much and became confused.

Alejandra became interested in both singing and acting while attending a local high school in Mexico City; she began taking singing lessons when she was 15, while she practiced acting with her high school’s drama club. She was also physically quite active during her teenage years, and often played soccer and volleyball with her peers.

Upon matriculating in 1986, Alejandra began working on her career as a singer, rather than attending college.

She became famous following the release of her third album – “Eternamente Bella” in 1990 – while her following two albums “Flor de Papel” (1991) and “Libre” (1993) were also hits. Alejandra was then signed to the record label BMG Ariola, and was nominated for both a Latin Grammy and a Grammy Award.

Her 14th album “A + No Poder” was released in 2015, and Alejandra’s since released two albums: “Vesus” together with Mexican singer-songwriter and dancer Gloria Trevi in 2017, and “La Guzman Live at the Roxy” in 2019.

Most recently, in July 2022, Alejandra embarked on her TUYA TOUR, while she’s set to perform in Las Vegas, Nevada in November 2022.

Alejandra’s acting career was launched in 1987 when she was 19, when cast to play Celia in an episode of the drama “Tiempo de Amar”, then the following year saw her play Paty in the episode “Infraganti” of the comedy “Papa Soltero”.

She had no roles in the following decade (besides in the movie “Verano Peligroso”), as she was focused on her music career. In 2002, Alejandra played Leonarda in the episode “Seminario de Celosas” of the comedy “La Familia P. Luche”.

She played Alejandra in the 2009 romantic drama “Atrevete a Sonar”, which Adrian Suar created, and which starred Cynthia Klitbo, Rene Strickler and Vanessa Guzman; it follows Patito who’s in love with the boy Mateo.

Alejandra went on to play a supporting character in the 2011 family comedy series “Una Familia con Suerte”, and her following role came in 2021, when cast to play Astrid in the romantic series “El Juego de las Llaves”, created by Veronica Bellver and Sandro Halphen, and which starred Maite Perroni, Humberto Busto and Hugo Catalan. It follows eight friends who are exchanging their sex partners; the series was nominated for an Imagen Foundation Award for Best Primetime Program – Comedy.

Most recently, in 2022, Alejandra appeared in an episode of the musical series “¡LaNoche!”

Alejandra’s been featured in many documentary movies, including the 2005 “Selena: Noche de Estrellas” and “Selena ¡Vive!, Acceso Total”, and the 2006 “Alejandra Guzman: La Trayectoria”.

She’s made a guest appearance in the talk-shows “Va por Ti”, “Morfi, Todo a la Mesa” and “Tu-Night Show Con Omar Chaparro”, amongst others.

She was nominated for a 1994 Premio Lo Nuestro Video of the Year Award, for “Alejandra Guzman: Mirala, Miralo”.

One of Alejandra’s first boyfriends, whom the public knows about, was Mexican singer and actor Erik Rubin Milanszenko; they were together in either 1990 or 1991, but broke-up when he began seeing Mexican musician Paulina Rubio.

Alejandra and American entrepreneur Farrell Goodman married in 1998, but divorced in the same year, after Farrell was arrested at an airport in Germany, trying to smuggle narcotics.

There’s only a single man whom Alejandra’s been with since her and Farrell’s divorce, that the public knows about: she was in a relationship with Gerardo Gomez de la Borbolia, but they split after she’d suffered a miscarriage, and fell into depression.

Alejandra underwent plastic surgery in 2009, but the polymers with which the unlicensed esthetician injected her caused infections; she spent the following a couple of years undergoing surgery, more than 30operations to cleanse her body.

She’s been estranged from her daughter Frida Sofia since 2020 – Frida has accused Alejandra’s father of sexually abusing her; Alejandra’s been defending her father since the accusations emerged.

She’s uploaded close to 3,000 pictures onto her Instagram account, and is quite popular on the social media network, having amassed more than 3.5 million followers.

Alejandra’s passionate about tattoos, and has several inked onto various parts of her body.

She likes to watch Hollywood movies, and her favorite actresses are Emma Watson and Meryl Streep, while her favorite films include “The Runaway Bride”, “Lost in Translation” and “Notting Hill”.

Alejandra was diagnosed with breast cancer in 2007, but was able to fight it off rather easily because of its early detection.

Alejandra’s net worth’s been estimated at over $20 million, as of September 2022.