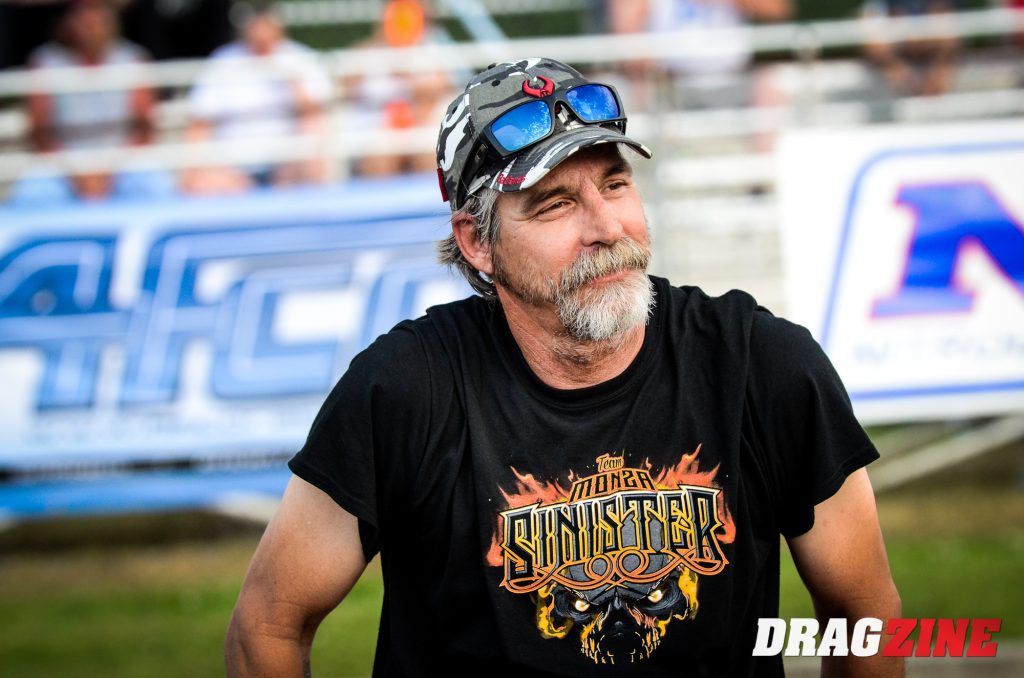 During the filming of episode six of season five of Discovery Channel’s reality TV series “Street Outlaws,” show superstar Jerry ‘Monza’ Johnston had a terrible accident while racing Chuck. It all began with the brand new upgrades that the car had to receive in order to stay competitive.

Monza started explaining the new modifications by saying ‘Being number six sucks. Getting beat by Joe 200 times in a row sucks. Having to play catch-up every race sucks. So, we gotta figure out how to make this car go better to the 330.’

Monza ran his 1972 Camaro Rally Sport nicknamed ‘Sinister Split Bumper’ with a nitrous motor, and without any rear-wheel steering on board. After upgrading to the turbo motor that produced significantly more power, Monza and his team had to install rear-wheel steering to help the car go straight at super high speeds. This made the car’s rear end weave to either side, thanks to flooring bar adjustments, much like the many supercars that sport immense horsepower.

Monza spent a considerable amount of money on basically every single part of his racing rig, but to rise to the top and make the most out of the upgrades, his team had to put all the pieces together exactly, and have them work flawlessly. To that end, Monza said ‘Until we get all of that right, we’re gonna be stuck in the bottom five.’ They continued tuning the car for multiple nights prior to the race, until they were satisfied with the result, with Monza stating ‘Finally, we’re headed in the right direction.’

How the crash happened

The aforementioned upgrades, while significantly boosting the car’s chances of success, created a perfect storm that resulted in the subsequent loss of vehicle control by Monza.

The light went out, and the two street racing veterans stepped on the pedals, but apparently Monza was significantly slower, lagging behind just enough to lose the race. To fix this problem and get a little more out of his machine, he pressed the so-called ‘scramble button,’ allowing the car to generate even more boost while held down. This gave him quite a noticeable speed increase, but just wasn’t enough to get him over the finish line first.

The issue took place when both of the cars were slowing down from the mind-boggling speeds achieved in the race, at which point Chuck deployed a parachute, but Monza seems to have relied solely on his brakes. The car twisted and turned, eventually spiraling into a barrel roll at significant velocity – it spun 360 degrees almost four times before finally stopping.

Seeing the car flip over and over, Monza’s competitors, colleagues and filming crew started running towards him, some yelling expletives in shock and disbelief. The ambulance and firefighters immediately rolled in to provide assistance. Monza’s reply to ‘Are you okay?’ was ‘I’m okay, I’m okay. Car’s not.’

"Jerry "Monza" Johnston unveiled his new PLR 481X powerplant in his Sinister Split Bumper Camaro. The street Outlaws star will be on the track soon

Posted by DragCoverage on Saturday, March 10, 2018

He wasn’t able to get out using the driver side door, and thus had to hop over the gear shift and use the other exit. The car was badly damaged on the outside, making the door mechanism completely dysfunctional. However, the inside, especially the driver’s cage, was almost intact. Thanks to having his helmet and seatbelt on, Monza suffered no damage during the crash, though he has a great deal to thank his driver’s cage for that as well.

As he stated multiple times, he spent a lot of money on that car. It’s also the best looking car out of the bunch according to most fans and colleagues, but a major portion of the finances went into driver safety.

Immediately upon exiting the car, Monza said ‘Where’s my boy?’ while looking for his son, knowing that his family suffered significant trauma watching him flip multiple times in a speeding pile of metal. Admittedly, they did tear-up watching the accident.

Upon being interviewed immediately after the crash, Monza said that he failed to press the parachute button because his finger was stuck on the scramble, victory seemingly the only thing on his mind at the time. He said ‘After the finish line, the back of the car started bouncing. The back brakes started locking up. The car just jumped sideways, shot straight across in front of Chuck, hit the curb, rolled, ended up in the trees.’

When asked whether he sustained any injuries, Monza admitted that his neck was a little sore, but that otherwise he felt no discomfort anywhere. He re-affirmed the fact that the car was well-made, stating ‘The bright side is I walked away without a scratch. I spent money in the right places. All my safety gear, the cage, all that costs a lot of money, but what’s your life worth?’

While his car didn’t crash, Chuck also suffered a state of distress during the accident. He initially almost slammed his machine into Monza’s due to having his straight line cut into by the out of control car. To avoid ramming the front of his car right into Monza’s passenger door, which would’ve made for a far worse headline, Chuck turned left and spun the car into a stop.

When asked about what happened right after the accident, he said ‘The only thing going through my mind was to get out of my car as fast as possible and run to Monza, and get him out of the car, make sure he’s okay, and make sure that we’re both okay to race another day.’

The conclusion after the incident

At the end of the day, before going home virtually intact, Monza explained that, in spite of the pair being super competitive, they don’t actually hate each other or wish ill upon one another. When the situation gets really serious and someone’s in danger of getting hurt, everyone comes out to make sure that everything’s okay, which shows that they’re true friends to each other before anything else.

Before Monza went home that night, the entire cast and crew present at the scene gathered to give him a hug and make sure he’s not hurt, wishing him all the best, and saying they’re glad nothing went wrong with him.

A much more fortunate crash

Although Monza’s crash was dubbed ‘scary’ by speedsociety.com, considering the lack of injuries, it wasn’t nearly as bad a the more recent one, from 7 August 2022, which was actually fatal. Hence, it’s safe to say that Monza got off very lightly, because such crashes usually come at a significant cost to the driver.

Near the early hours of 8 August 2022, while filming the fourth season of the spin-off series “Street Outlaws: Fastest In America” right by the Henry Allen Generating Station in Nevada, street racer Ryan Fellows tragically passed away.

Nine races in total were scheduled for the night, and while the first seven went smoothly, during the eighth, Ryan lost control of his gold Nissan S30-bodied car nicknamed ‘Datsun 204Z,’ flipping over after the finish line and causing significant damage to the car’s insides. The vehicle burst into flames, causing Ryan to lose his life before the emergency responders could get him out of the wreckage.

Certain legal issues arose after the incident, when it was confirmed that the show’s producers (Warner Bros. Discovery and Pilgrim Media Group) weren’t authorized a film permit, though were in possession of a Nevada Department of Transportation permit to close off the street for the filming.

Much more importantly, however, the National Hot Rod Association (NHRA) reminded the public that in 2015 they were about to revoke the licenses of all “Street Outlaws” competitors, due to the show not following safety regulations.

According to NHRA Safety Safari, their events need to be held on closed circuits that contain the compulsory catch fencing and crash walls, which will vastly improve the survivability of the competitors in any accident. “Street Outlaws” and its spin-off series are generally filmed in streets that are closed to the public, but which usually have no walls or fences.

With this in mind, it can be argued that Ryan’s passing is to be blamed on the producers’ general disregard for safety during filming, since the mandatory precautions would most likely have prevented the car from flipping over to the side and eventually catching fire.

Following the incident, the official “Street Outlaws” Twitter page came alive with condolences for Ryan’s family, stating ‘The Street Outlaws family is heartbroken by the accident that led to the tragic death of Ryan Fellows. We extend our deepest sympathy to Ryan’s loved ones as they process this sudden and devastating loss.’

Ryan’s family opened a GoFundMe campaign in an attempt to deal with the loss, stating that they ‘will need help with the next steps of grief and living life after losing the heart and soul of their beautiful family.’ By September 2022, they’d raised almost $25,000. Ryan left behind his wife Liz, 18 year old son Josiah, and daughter Olivia who is 10.

The Street Outlaws family is heartbroken by the accident that led to the tragic death of Ryan Fellows. We extend our deepest sympathy to Ryan's loved ones as they process this sudden and devastating loss.

As a result of rising controversy and the general shock of the public, the release date for the fourth season of “Street Outlaws: Fastest In America” is yet to be confirmed by the producers. It’s very likely that the show’s production took Ryan’s death as a significant blow, from which it may not recover.

One last boost to Monza’s popularity comes from the two videogames made after the series, which feature most of the cast members of the show, along with their iconic rides. “Street Outlaws: The List” was released for Xbox One, PlayStation 4 and Nintendo Switch on 22 October 2019, and a month later for Microsoft Windows, by Team6 Game Studios under the publishing of GameMill Entertainment in North America, and Maximum Games in Europe.

The sequel entitled “Street Outlaws 2: Winner Takes All” came out on the aforementioned consoles, as well as PlayStation 5 and Xbox Series X/S, on 21 September 2021, and lastly Microsoft Windows on 3 December 2021.

The first game received a 2/5-star rating by switchplayer.net, which mostly criticized the gameplay, stating that the players required extensive car knowledge in order to understand what they’re doing, and that the racing is ‘boring to the level of watching paint dry.’

Monza’s life after the crash

With virtually no damage taken during the flipping of his car, Monza took about a month to repair his machine and get right back into racing. He continued strongly and kept climbing the ranks, eventually reaching the first spot, after which he dropped down and got back up yet again multiple times.

Throughout the course of the show since 2015, when season five was being filmed and the crash happened, Monza obtained the first spot on several occasions. At the moment, the “Street Outlaws” website lists him in fourth place overall. Above him are Ryan Martin, Chuck and Daddy Dave.

The original show ended with its 13th season on 13 May 2019, at which point Monza got to racing in its spin-offs, which he still does in September 2022. He’s been racing since the 1980’s, while “Street Outlaws” has had him on their list since 2006. He is generally known as one of the most collected racers in the show.

Additionally, he has a YouTube channel with almost three million total views and nearly 60,000 subscribers, onto which he regularly uploads videos from his professional and private life, mostly related to car modifications and tests, as well as fishing – his favorite hobby.

He probably also earns some money from his Instagram page, on which he tends to make sponsored posts, promoting certain fuel brands in between pictures and videos of the cars that he drives or admires.

Celebrities Who Have Gambling Problems