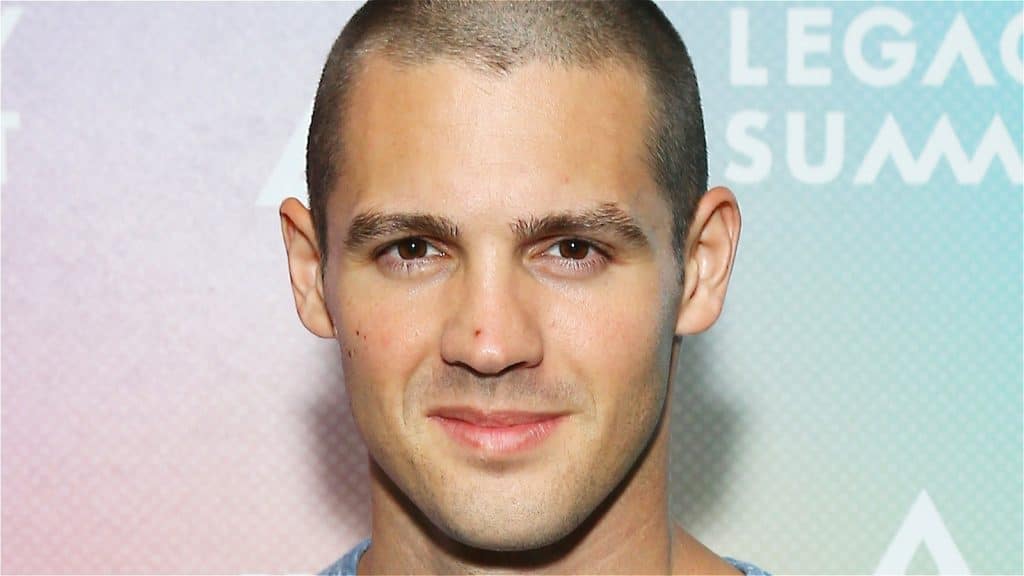 About Steven R. McQueen Wiki (aka Jeremy in “Vampire Diaries”)

He was born to former actor and race car driver Chad McQueen, and former actress and humanitarian Stacia Robitaille (previously named Stacey Toten). His parents divorced and Stacia married former ice hockey player and professional ice hockey executive Luc Robitaille. Steven has three younger siblings; two from his father’s side, Chase (born in 1995) and Madison (born in 1996) and a half-brother from his mother’s side, Jesse (born 1995).  The “R.” in Steven’s stage name is from “Robitaille,” to honor his stepfather’s surname. In an interview with the New York Post, Steven spoke about the role Luc has had in his life, ‘My stepdad has been more like a biological dad in my life. I’m pretty close with my biological dad, but I think of him more like an uncle. It’s a good relationship.”

Steven has quite an interesting family tree. His paternal grandparents are Filipin actress Neile Adams and star American actor Steve McQueen. Neile’s niece is Isabel Preysler, a Filipino-Spanish socialite and the mother of Enrique Iglesias, Chabeli Iglesias and Julio Iglesias Jr. – meaning Steven is the second cousin of the Iglesiases.

In his teenage years, Steven moved a lot with his parents and ended up being home-schooled until he matriculated. When they were living in Detroit, he really began getting into films, and watched everything his grandfather appeared in – ‘From there, my passion for it slowly unfolded. I went to a couple of classes and I grew to love it.’ Steven decided to leave home and move back to Los Angeles to pursue his own acting career by enrolling in classes.

Steven is possibly best known for playing Jeremy Gilbert in “The Vampire Diaries” and “Legacies” and Jimmy Borrelli in “Chicago Fire.”

American actor Terrence Stephen McQueen – professionally known as Steve McQueen – was born on 24 March 1930 in Beech Grove, Indiana, US. From 1956 to 1972 he was married to Neile Adams, then married actress Ali MacGraw in 1973, but they divorced in 1978, and in 1980 he married his third wife Barbara Minty – they remained married until his passing on 7 November 1980 in Ciudad Juárez, Mexico. Steven’s fame was brought upon by his antihero persona, which was most popular in the 1960s. He was the star of several blockbuster films, including the original “The Magnificent Seven” (1960), “The Great Escape” (1964), “Bullitt” (1968 – credited with ‘selling’ the Ford Mustang car), and “The Towering Inferno” (1974). His nickname was the ‘King of Cool,’ and he raced under the name Harvey Mushman. He had two children, one of whom is Chad McQueen.

Filipina-American actress, dancer and singer Ruby Neilam Salvador ‘Neile’ Adams, was born on 10 July 1932 in Manila, Philippine Islands. After her divorce from Steve in 1972 she was married to Alvin Toffel from 1980 until his passing in 2005. She appeared in over 20 television series and films throughout her career from 1952 to 1991.

American actor and race-car driver Chadwick Steven ‘Chad’ McQueen was born on 28 December 1960, in Los Angeles; he married Stacey Rae Toten in 1987, but they divorced in 1990, after which he married Jeanie Galbraith in 1993. He has three children Steven, Chase and Madison. As of Aaugust 2022 Chad’s net worth is estimated at $45 million.

Lucia, Steven’s mother, is very private about her personal life, but his stepfather not so much. Canadian-American former ice hockey player and executive Luc Robitaille was born on 17 February 1966 in Montreal, Quebec, Canada. He was part of the National Hockey League for 19 seasons and is now the president of the Los Angeles Kings which are under the NHL. Lucia and Luc have a son named Jesse who was born on 2 June 1995. In 2005 Luc earned his American citizenship.

Steven was 17 in September 2005 when he made his television debut as a guest star in an episode of “Threshold,” a CBS science fiction drama. From there, Steven went on to appear in a few more CBS series including “CSI: Miami,” “Without a Trace” and “Numb3rs.” From 2005 to 2007, he appeared as Kyle Hunter in seven episodes of “Everwood,” a WB drama; Kyle was a moody teen piano prodigy struggling to figure out his sexuality. His coming out storyline was written so viewers could understand the struggles people go through when figuring out their sexuality and also let viewers going through that understand that they are not alone.

In 2006, Steven co-starred in the short film entitled “Club Soda,” and two years later, he made his feature film debut in “Minutemen” a Disney Channel Original Movie, playing the villain named Derek Beaugard in the film; when asked if it was difficult to portray an evil character, Steven replied, ‘You know, it was actually really fun because I’m not really that mean in real life. It’s all just pretend and really fun.”

Steven was cast as Elena’s younger brother Jeremy Gilbert in “The Vampire Diaries” in March 2009 – CW released their television series based on the fantasy supernatural drama L.J. Smith novels of the same name. Steven appeared in the first six seasons of the series until 2015 – Jeremy was written out by explaining to the audience that he would be leaving Mystic Falls to attend art school. He guest appeared in the series finale in 2017, helping the Salvatore Boarding School for the Young and Gifted, then again reprised his role the following year in the spin-off series, “Legacies.”

In 2010 he played Jake Forester in “Piranha 3D,” the loose remake of the 1978 horror entitled “Piranha.” Jake is a socially awkward teenager who falls in love with a girl who is two years older than him. The cast was made up of Jerry O’Connell, Adam Scott and Elisabeth Shue.

In 2014 Steven gave modeling a try when he joined Abercrombie and Fitch’s Spring campaign, “The Making of a Star.” Other celebrities who modeled in the campaign included Debby Ryan, Christa B. Allen,and Colton Haynes. They also made a promotional video in which Steven spoke about the inspiration he gets from his grandfather’s work, ‘… I started watching my grandpa’s movies, and I saw what an impact he made to the world and I said to myself, ‘Hey, I want to do that.’’

The following year Steven was cast as Jimmy Borrelli in the fourth season of “Chicago Fire,” an NBC drama series. For the first six episodes he was credited as a recurring role, then from the seventh episode, as part of the main cast. In 2016, “Chicago Fire” and “Chicago P.D.” have a few crossover episodes, falling under Dick Wolf’s “One Chicago” franchise, and Steven appeared in those too. Unfortunately, in season five, episode two of the show, Jimmy was written out of the show when he suffered a severe injury while responding to a fire. The injury didn’t end his life, but it was too dire to continue working as a firefighter.

Aside from reprising his role as Jeremy in “Legacies,” in 2018 Steven also appeared in “The Take Off,” a short film that premiered at the Santa Barbara International Film Festival. He also starred in “Home by Spring,” the first Hallmark Orginal Movie he worked on, and ended 2018 starring in Netflix’s “Medal of Honor” as Joseph Vittori. The anthology documentary dedicated that episode to following Joseph’s journey, and how he ended up as the posthumous recipient of the US Medal of Honor.

In 2020, Steven starred alongside Casper Van Dien and Neal McDonough in “The Warrant” an INSP western television film; in an interview, he spoke about how he got to work on the film – ‘Neal’s been a family friend for a long time so he called me and we had a conversation about it and he said it was gonna be a Western, and we’d get to shoot some guns and have a good time…’

In 2006 he attended the Beverly Hills Film Festival as a nominee in the Best Male Performance category for his work in “Club Soda”, which he won. In 2013, his performance as Jeremy earned him a nomination for a Teen Choice Awards in the Choice TV Male Scene Stealer category, but he didn’t win.

Steven has had a few girlfriends in the industry, such as Hilary Harley, Candice Accola, Dylan Peen, Chelsea Kane, Olivia Pickren, Malese Jow, and Trisha Cummings. On 25 January 2018, he took to Instagram to announce his happy news, posting a black and white photo of himself and model Alexandra Silva along with the caption ‘She said yes.’ Sadly, the pair split up only four months later, without explanation.

He currently resides in his Los Angeles apartment.

In 2014, Steven began supporting the Thirst Project, a non-profit organization working to provide safe drinking water to underprivileged and underdeveloped communities around the world. He attends the Annual Thirst Gala which is the organization’s annual fundraising event. He also visited the Kingdom of Eswatini (previously called Swaziland) in Southern Africa to assist in the installation of water systems.

After playing a few drug addicts, he was accused of being a drug addict himself, but Steven claims that he’s never been involved with drugs.

Steven made his love of poetry permanent when he had it tattooed on his back saying, ‘The Road Not Taken,’ which is a famous poem by Robert Frost. He explained his reasoning in the printed version of Abercrombie and Fitch’s Spring campaign, saying ‘He [Frost] shows that there are always choices in life, you need to embrace them and maybe even take the path that others don’t.’ His other tattoo is of his family crest.