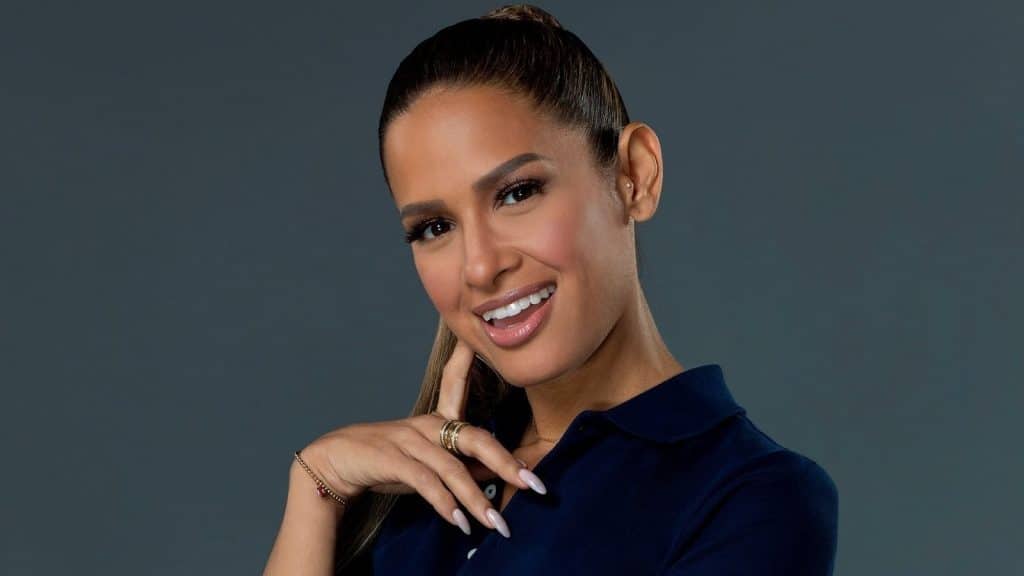 Rocsi Diaz is a Honduran television and radio host, who is perhaps known best for being a co-host on the Black Entertainment Television (BET) show “106 & Park”. She is also an actress, and an influencer with a large following on her media channels.

Raquel Roxanne Diaz was born on 17 November 1981, in Tegucigalpa Honduras, of Honduran and Chilean descent. Her mother was a single parent who raised three children by herself; her name and occupation are unknown, and the name of her father hasn’t been revealed either. Her family moved to New Orleans, Louisiana USA when she was young. Even though she is primarily a Latina, she was raised in the US, surrounded by American culture.

Rocsi attended West Jefferson High School in Harvey, Louisiana, and was a cheerleader when she was in middle and high school; she suffered from anorexia during that period. After matriculating from high school, she enrolled at Nicholls State University.

Career as a TV and radio host

Rocsi began her career in the media when she was chosen as a host at top radio station 97.9 The Beat – Dallas Fort Worth Hip-Hop Radio Station in Dallas, Texas. She had a distinctive style that set her apart from her fellow radio hosts and personalities, and thanks to her unique character, she was noticed by Boston’s Hot 97.7, which hired her as a DJ at their station. In 2004, she switched stations once again, moving to Chicago, Illinois to work as a midday-hour DJ at Power 92 WPWX-FM – while hosting the show, she acquired the nickname “The Midday Mami”.

Rocsi’s career took a more serious turn when she was hired as the co-host of the BET show “106 & Park” alongside Terrence J. – a famous American entertainment reporter. “106 & Park” was an R&B and hip-hop music video show that had a countdown format and aired at 6:00 pm ET/5:00 pm CT on weekdays. It was also broadcast outside the US in countries such as Japan, the UK, Canada, as well as the Caribbean and Africa.

Thank you for everyone who tuned into our @trulyla_ summer concert series with some many amazing artist. Yesterday was…

In November 2012, after leaving BET Rocsi started working as a daily correspondent and weekend co-host at Entertainment Tonight, but her employment was terminated in 2014 after the channel hired Nischelle Turner.

A year later, Rocsi started working at CNN’s HLN as the Los Angeles contributor in the show “The Daily Share”. In 2016, she was chosen to be the co-host in the VH1 show “Dating Naked”, alongside Amy Paffrath. In 2020, she became the co-host of the American competition show “Cannonball” with The Miz, and in 2021, she started co-hosting “Alter Ego”, the Fox reality singing competition, alongside Alanis Morissette, Grimes, Nick Lachey, and will.i.am.

Apart from being a successful TV and radio host, Rocsi is also an actress. She made her first appearance on television in 2000, when she was a contestant in the show “Fear”, and her first acting role in 2009, playing the role of Maxi in an episode of the TV show “Brothers”. In 2012, she portrayed Kate in “Gangs of Roses 2: Next Generation”, which centered around women who decide to commit a heist after finding a missing piece to the US Treasury lock. Concurrently, she played the role of Paula in “Soul Ties”, and Claudia in “The Last Letter”, and then appeared as Evelyn Vasquez in the movie “The Great Divide”, in which the main character Tosha comes up with a game that reveals the secrets of her friends. She hasn’t been in any movies since 2012.

Career as an influencer

After gaining wide recognition on social media, Rocsi became an influencer with approximately a million followers on her Instagram account. She partners with various brands, including Benefit Cosmetics, Lulu Lemon, Essence, and others to promote sponsored content. Apart from her personal Instagram account, she has a separate channel – RocsisRecipes – which is dedicated to food blogging. Rocsi has an OnlyFans account too, on which she shares pictures of her feet. She has almost 950,000 followers on Twitter.

Rocsi received her first award in 2013, when she was chosen as the winner of the Ruben Salazar Award for Communications. She received a Daytime Emmy Award for Outstanding Entertainment News Program in 2014, which she shared with other members of the show.

As of late 2022, Rocsi seems to be single; she hasn’t revealed information about having a partner in her interviews or on her social media channels. She had the most recent public relationship in 2012, when she dated the famous actor Eddie Murphy, however, they broke up the same year.

Previously, a lot of rumors were circulating about Rocsi’s personal life. It was believed that she dated Tyrese Gibson in 2003, David Bowens in 2007, Michael Misick in 2008, Amar’e Stoudemire in 2010, and Bruno Mars in 2011.

Rocsi has never been married and she doesn’t have any children.

Rocsi is 41 years old, and has long brown hair, brown eyes, and tanned skin. She has a height of 5ft 2ins (157cm) and weighs approximately 123lbs (56kgs). She usually wears elegant clothes, but likes switching up her styles, occasionally sporting casual or sporty pieces. She loves wearing designer clothes and shoes such as Dolce Gabbana, Valentino, Yves Saint Laurent, etc.

As of late 2022, Rocsi Diaz’s net worth is estimated at close to $3 million, mainly earned from her reporting jobs and brand partnerships. She also earns money from her OnlyFans feet account, the subscription of which costs $15 per month. Her annual income remains undisclosed, and she hasn’t revealed whether she owns any real estate properties or not.