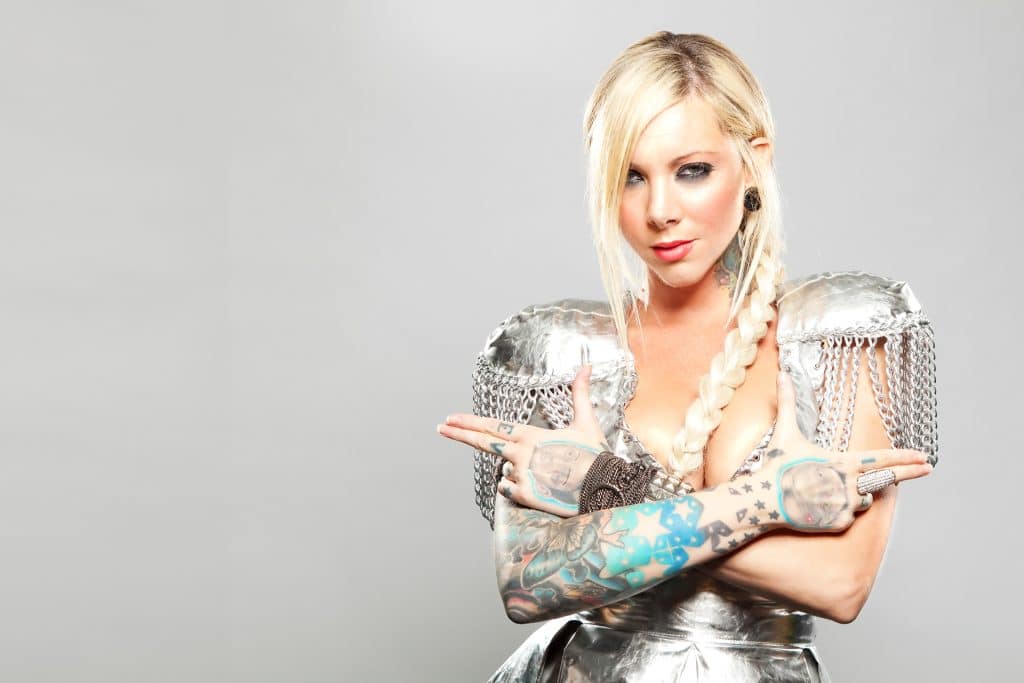 Who is Maria Brink?

American singer-songwriter Maria Brink was born in Albany, New York State, USA on 18 December 1977, under the zodiac sign of Sagittarius. She’s probably best known for being the singer of the American rock ‘n’ roll band In This Moment.

Maria was raised in Albany as an only child, solely by her mother Rita who was only 16 when she gave birth to Maria; Rita’s boyfriend and Maria’s father abandoned them not long after Maria was born, and it was family friend Laurie Barber who helped Rita and Maria with everything they needed. Maria has revealed that she sees Laurie as her second mother, while she today also sees her personal assistant Avisia as her sister.

Rita began introducing Maria to famous rock ‘n’ roll bands when she was only five years old, such as The Rolling Stones, Patti Smith and Black Sabbath. She fell in love with singing while attending a local elementary school, and Rita and Laurie then together paid for Maria’s singing lessons.

She joined her first band Pulse while attending a local high school in Albany, and upon matriculating in 1996, Maria moved to California wanting to pursue a career as a professional singer. She worked several jobs to financially support herself, and in 2002 moved to Los Angeles. Prior to forming In This Moment, Maria sang in bars and cafes, and also worked in various stores.

Her band In This Moment

Maria and Chris Howorth were introduced through an audition in 2004, but Chris initially refused to work with Maria because he was looking for a male singer; he eventually apologized, and the two of them, together with drummer Jeff Fabb, formed the rock ‘n’ roll band Dying Star.

The beginning wasn’t easy, as Chris quit after only two performances, and Maria had to convince him to return; they then agreed to change the name of the band to In This Moment, and hired bassist Josh Newell and guitarist Blake Bunzel. Not long after joining, Josh left the band because of personal issues, and was replaced by Jesse Landry, while famous American bassist Rob ‘Blasko’ Nicholson became their manager.

Posted by In This Moment Maria Diane Brink Fan on Thursday, December 23, 2021

In This Moment signed a contract with Century Media Records in the second half of 2005, and their debut album “Beautiful Tragedy” came out on 20 March 2007; their singles “Beautiful Tragedy” and “Prayers” became quite popular, so the band then embarked on multiple tours in 2007 and 2008, with worldwide famous trash metal band Megadeth, and popular British singer-songwriter Josh Michael ‘Ozzy’ Osbourne.

In This Moment’s second album, “The Dream” followed on 30 September 2008, peaking at #73 on the Billboard 200 chart; the band then promoted the album by touring with American rock ‘n’ roll bands Filter, Papa Roach and Five Finger Death Punch.

In April 2010, Maria won the Revolver Golden God Award for Hottest Chick in Metal, and on 9 July of the same year, she and her band released their third studio album “Crossed Wasteland”, which peaked at #40 on Billboard 200. Following the album’s release, In This Moment performed at Mayhem Festival 2010, and embarked on the Music as a Weapon V tour.

Their fourth album “Blood” was released on 12 June 2012, and was certified gold by the Recording Industry Association of America (RIAA) five years later; In This Moment’s debut live album “Blood at the Orpheum” came out on 21 January 2014.

They signed a contract with Atlantic Records on 5 February 2014, and their fifth studio album “Black Widow” came out on 17 November 2014. The band then spent the year 2015 touring around both Europe and the US – their drummer Tom Hane quit the band on 16 March 2016, and was replaced by Kent Dimmel.

Their sixth album “Ritual” was released on 21 July 2017, peaking at #23 on Billboard 200 and selling over 22,000 copies; In This Moment’s seventh (and most recent) album “Mother” was released on 27 March 2020. They were nominated for their first Grammy Award in November 2020, in the category Best Metal Performance; the award was won by the American heavy metal band Body Count.

Maria was only 15 years old when she gave birth to her son Davion – the name of the boy’s father hasn’t been disclosed, but it’s known that he wasn’t around while Davion was growing up. Maria both studied and worked to financially support herself and her son, while simultaneously helping her mother with her drug addiction.

In 2013, Maria was in a relationship with American musician Jonathan Miller, who’s probably known best for being the bassist of the American heavy metal band DevilDriver.

For over a year now, she’s been in a relationship with Joe Cotela, the singer of the American nu metal band Ded.

Maria hasn’t mentioned other men whom she’s dated, and is in a relationship with Joe Cotela as of October 2022, hasn’t married, and has a son to whom she gave birth when she was 15.

Maria’s a huge lover of animals, which is one of the reasons why she’s today a vegetarian; she’s also active with the non-profit organization People for the Ethical Treatment of Animals (PETA).

She’s interested in art, and is an avid painter; Maria’s professional name is Maria Brink’s Wonderland.

She has her own favorite bands, some of which are the French electronic music group M83, the American heavy metal band Pantera, and the American alternative metal band Deftones; her favorite vocalists are Phil Anselmo and Sarah McLachlan.

Maria’s an Instagram star, and there are today more than 500,000 people following her on the social media network, on which she’s posted nearly 1,000 pictures and videos.

Her favorite actresses are Helena Bonham Carter and Anne Hathaway, while some of her favorite movies include “Enola Holmes”, “Corpse Bride”, and “Alice in Wonderland”.

Maria’s net worth’s been estimated at over $2 million, as of October 2022.