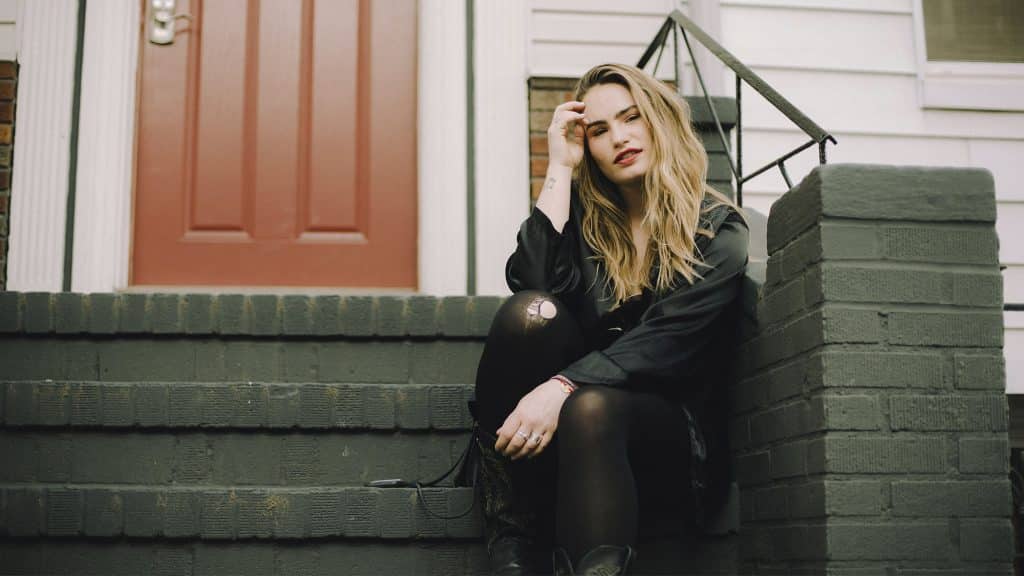 Kathryn Gallagher is an American actress, possibly known best for her role in the musical “Jagged Little Pill”. She is also a successful singer and musician, promoting her pieces on Spotify, SoundCloud, Apple Music, and other platforms.

Kathryn Gallagher was born on 29 July 1993, in New York City USA. Her father, Peter Killian Gallagher is a famous actor whose filmography includes several popular movies and TV series such as “The Underneath”, “The O.C.”, and “Grey’s Anatomy”. He has received multiple awards including a joint Screen Actors Guild Award for Outstanding Performance by a Cast in a Motion Picture for his role in the movie “American Beauty”. Kathryn’s mother, Paula Harwood, was reportedly an amateur actor as well, however, she didn’t pursue her career. Paula and Peter are a renowned couple in Hollywood, because they have been together since 1983.

Kathryn has a brother, James Gallagher who is a professional cinematographer, director and photographer – he’s shot his sister and parents multiple times, and also directed a short documentary about his grandmother, Paulette, who was a ballet teacher. She passed away in 2019.

Kathryn moved to Los Angeles at the age of 11; she attended The Adderley School where she took drama classes, and she started writing music during the same period. After matriculating from high school, she enrolled at the University of Southern California, Thornton School of Music.

Kathryn started releasing music actively when she was still at university. In 2012, she came out with multiple singles such as “I’ll Be Known” with Erik Scott Smith and “Mess of a Machine” with John O’Callaghan. During the same year, she wrote the song “Damaged” which was one of the Original Motion Picture Soundtracks of the movie “Thanks for Sharing”. Her single “Nothing Ever Done” was featured in the movie “Someday This Pain Will Be Useful to You”.

In 2014, Kathryn released new songs including “I Wanna Wear a Dress”, “Since You Left”, and “I Hope She Loves You”. Concurrently, she came out with her first extended play (EP) “I’m Fine”, followed by the second – “American Spirit” in 2015. In 2019, she released two non-album singles, “Bad News” and “Whistler”.

In 2020, during the early stages of the Covid19 pandemic when quarantine was the only viable solution for combating the virus, Kathryn moved to her family home in Connecticut, USA, where she wrote two new EPs “Demos, Vol. 1” and “Demos, Vol. 2”, recording and produced these releases herself.

Kathryn embarked on her acting journey when she became a member of the ensemble in the Deaf West Theatre’s Broadway revival of the German play “Spring Awakening” in 2015. She was the Voice of Martha, as well as a Dance Captain. In 2016, she played the role of Lily in the off-Broadway play “Dust Can’t Kill Me”.

Kathryn’s most notable stage performance was in 2019, in the Broadway show “Jagged Little Pill”, in which she portrayed Bella Fox, who was the main character of the sexual-assault plot line.  According to Nylon Magazine, initially the actress was part of the ensemble, but her role was upgraded once Alanis Morissette’s song “Predator” was added to the plot. Kathryn performed in the show until 2021 when it was closed as a result of Covid19.

In 2018, Kathryn made her debut on TV in the first season of the series “You”, when she landed the recurring role portraying Annika Attwater, a social media influencer who is friends with the main character Guinevere Beck. In 2019, she made guest appearances in the shows “The Flash” and “Indoor Boys”, then in 2020, she had the recurring role as Mildred in the TV series “Boy•Friends”.

Kathryn made several guest appearances in 2021, in the shows such as “Blue Bloods”, “Modern Love”, and “Gossip Girl”.

In 2020, Kathryn joined Julie Rieger’s team to found a ‘metaphysical supply store’ called Vibes,  an online shop that sells crystals, stones, accessories, and ritual tools. It’s also an informational platform that educates its audience about cosmic vibrations, and the various properties of each crystal. Vibes also includes a charitable layer – the store donates 5% of all sales to the Joyful Heart Foundation, a charity organization that helps survivors of sexual assault, domestic violence, and child abuse.

Throughout her acting and singing experiences, Kathryn has received multiple notable awards and nominations. For her work in “Spring Awakening”, she jointly won the Ovation Award in the category of Acting Ensemble of a Musical in 2015 and was nominated for the Astaire Award for Outstanding Ensemble in a Broadway Show in 2016. During the same year, she won the New York Musical Theatre Festival Award for her role in the play “Dust Can’t Kill Me”.

As of late 2022, Kathryn appears to be single; she identifies as bisexual, but otherwise the actress hasn’t revealed any details about her personal life. She hasn’t talked about having a partner on her social media channels or in any of her interviews, nor discussed any previous relationships.

Kathryn Gallagher is 29 years old. She has dark brown hair and hazel eyes. The actress is 5ft 8ins (173cm) in height and weighs approximately 132lbs (60kg). She loves wearing designer clothes, frequently sporting brands such as Karl Lagerfeld, Sergio Rossi, Roger Vivier, Jimmy Choo, and others. She wears casual clothes such as jeans and t-shirts on daily basis, however, she also loves elegant dresses and high heels.

As of late 2022, Kathryn Gallagher’s net worth is estimated at close to $8 million, accumulated mostly through her successful career in acting and music. Occasionally, she also shares sponsored content on her Instagram, but it’s unknown how much she earns from partnerships. The actress hasn’t revealed any information about her annual income, or any real estate properties in her possession.