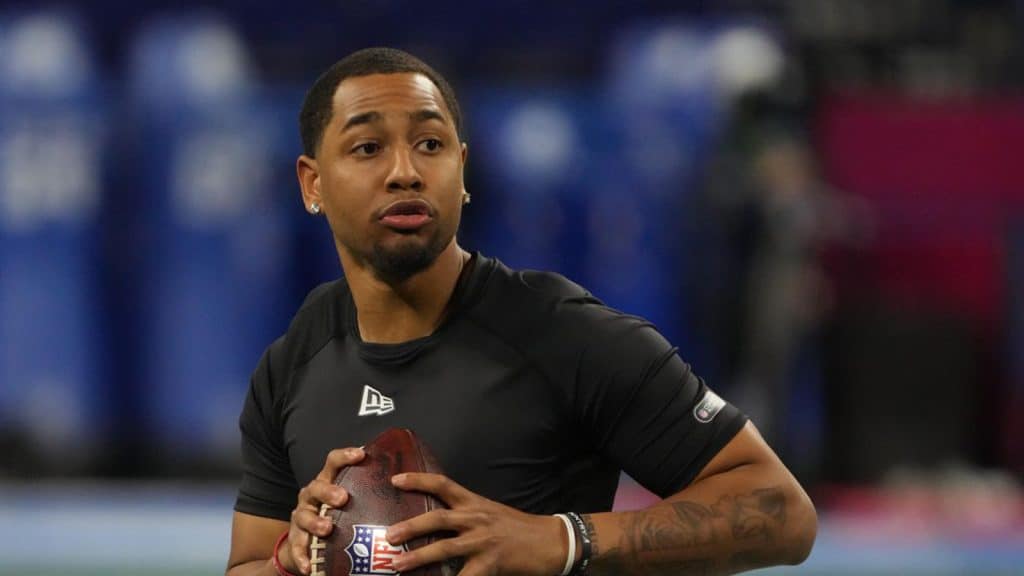 Who is Kaleb Eleby?

Kaleb Eleby is an American Football player, who played for the Western Michigan University team as a quarterback. He declared for the 2022 National Football League (NFL) Draft but wasn’t picked.

Kaleb Eleby was born on 13 March 2000, in Maryland Heights, Missouri, USA, the son of Kenyatte Eleby and Milton Smith. He hasn’t shared details about whether he has siblings or not, but he grew up in his hometown and was raised by his parents, who were deeply involved in American Football, so he became interested in the sport at an early age.

He attended Pattonville High School in his hometown, where he played football for the school’s team, excelling as the main quarterback, posting a few records on his way to becoming an unexpected star. He was a four-year letter winner, and captained his team for three years. He led the team to the Suburban XII South Conference title and the Class 5 state championship game.

In his four years, he threw for 9,735 yards and 95 touchdowns, breaking all school passing records, ultimately receiving the Elite Student-Athlete Award. Moreover, he was named Class 5 Missouri Player of the Year as a senior.

After impressing almost everyone, Kaleb received promising offers from athlete programs from some of the most prestigious universities, including Illinois and Iowa State, among others. Still, the young three-star recruit chose to stay in his area, and committed to Western Michigan University to play for the Broncos.

Kaleb became Western Michigan’s player officially in 2018. He matriculated from high school early, and joined the team for early preparation and training. However, he waited some time before making his debut, beginning his career as a back-up to Jon Wassink.

Unfortunately, Jon sustained a season-ending injury in the game against Toledo, and Kaleb took his position as the new starting quarterback.

Congratulations to 2018 Pattonville High School alumnus Kaleb Eleby for being named the quarterback on the St. Louis…

Posted by Pattonville School District on Saturday, May 2, 2020

Under his play, the team suffered four losses and had only one win, in a home game against Northern Illinois 28-21. He finished the season with 92 completed passes out of 147 attempts for 1,092 yards, four touchdowns, and three interceptions.

The Western Michigan star in the making was redshirted for the 2019 season, but he was back in action in 2020. The season was cut down to conference games only, so only six games were played, and Kaleb led the team to a 4-2 record. They were on the way to the championship, but the consecutive losses to Ball State and Eastern Michigan saw them fail to qualify for the 2020 Mid-American Conference Championship and bowl bid. Kaleb had a rather successful season as he threw 99 passes from 153 attempts, and had 18 touchdowns and two interceptions. Moreover, he was named All-MAC Third Team.

The following season was a staggering experience for the young quarterback. He returned as the starting quarterback under head coach Tim Lester who was in his fifth season at Western Michigan. The start of the season wasn’t very promising for the Broncos, as they debuted to a blowout loss 14-47 against the University of Michigan Wolverines, but then bounced back very quickly, defeating Illinois State 28-0 the following week.

They continued with the second victory of the season, this time a narrow win against Pittsburgh, 44-41. Two more victories followed, against San Jose State and Buffalo, before they recorded the second loss of the season as they were dominated by Ball State 40-25 at home. They returned the same measure to Kent State as they scored 64 points, outscoring Kent State by 27. There were more than 18,700 attendees, which was their highest of the season.

Unfortunately, the Broncos lost their next match at Glass Bowl in Toledo, Ohio, against the University of Toledo Rockets 34-15, then suffered yet another terrible defeat against their fierce rivals, Central Michigan Chippewas, their fourth of the season.

They still had a positive record at the time, and bounced back with a narrow win against Akron Zips at their home, Waldo Stadium, though there were just 8,443 die-hard fans in attendance. The score on the board was 45-40 for the Broncos.

The next game-week brought a tragic loss to Eastern Michigan as the Broncos forfeited the victory with 21-22 on the board. However, this didn’t stop them from recording the win in the last match of the season against Northern Illinois – Kaleb and the rest of the team smashed the Northern Illinois Huskies 42-21.

They ended the season with an 8-5 record and were crowned Quick Lane Bowl champions as they defeated the Nevada Wolf Pack football team of the University of Nevada, Reno, with a 52-24 score. Kaleb scored one rushing touchdown in the bowl game, and threw for two more.

“My job is to execute. To lead the team and get the ball into playmakers’ hands. I think looking at the film, people will see that I do that.”

I caught up with former WMU QB Kaleb Eleby on the team’s latest bowl game win, his combine invite and more:https://t.co/Ff8QzaMdOO pic.twitter.com/737Y8kYrmd

Kaleb played in all 13 games and had 230 completed passes for 23 touchdowns and impressive 3,277 yards. He also rushed 64 yards for six touchdowns.

He finished his college career with 6,084 yards, 45 touchdowns, and 11 interceptions.

To speak of his academics, Kaleb majored in Recreation: Sport Management.

Unfortunately, his athleticism was questioned at the draft combine, scoring undeniably some of the worst results, including 4.91s in the 40-yard dash, while his undersize was another problem.

Despite his talents and exceptional deep ball accuracy, Kaleb wasn’t picked during the 2022 NFL Draft. Since then, he’s had an offer from the Seattle Seahawks to join their rookie camp.

As of mid- 2022, Kaleb Eleby’s net worth is unknown as he’s yet to sign a professional contract.

Unfortunately, Kaleb has held his personal life to himself. There are no details about his relationship history or his current status. According to some reports, he is single and focused on making it to the NFL.

The young American football star has brown eyes and short black hair. He stands at 6ft 1in (1.85m), and weighs about 210lbs (95kgs). His vital statistics are unknown, but he has an athletic figure.