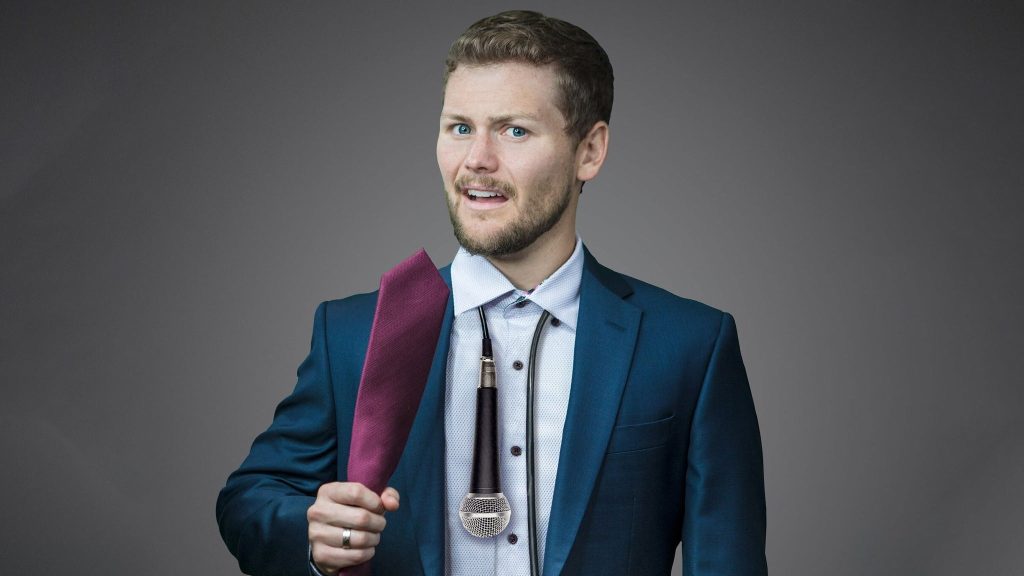 An actor and comedian, Drew Lynch captured the hearts of America with his performance in the 10th season of the world-famous show “America’s Got Talent“. When one of the judges, Howie Mandel, pressed the Golden Buzzer and sent him straight to the quarter-finals, for this young man it was a dream come true.

At the Radio City Music Hall, Drew performed in Week 1 of the quarter-finals, and then in Week 1 of the semi-finals, finished in the Top 5 Acts, and at the end, he placed second in the competition;.

If you ever wondered what happened after the show, and you are willing to know more about his life and work, let us tell you all about this talented young man.

Andrew ‘Drew’ Lynch was born under the zodiac sign of Leo, on 10 August 1991, in Indianapolis, Indiana USA; he holds American nationality, and his ethnicity is Caucasian.

Drew was raised in his hometown by his parents Chris and Tim, a water heater manufacturer and an insurance industry employee, respectively. He has three siblings, a brother Taylor, and two sisters Monica and McKailyn.

Speaking of his educational background, he attended a local high school, and upon matriculating in 2009, he didn’t enroll in college but moved to Los Angeles, California, to fulfill his childhood dream of becoming a Hollywood actor.

Drew was 19 years old when he auditioned for the popular sitcom “How I Met Your Mother“, and made it to the first round, unfortunately, after an accident, he was unable to go for his second audition.

In 2015, he tried his luck in the show “America’s Got Talent“, and after the show finished, he made his acting debut portraying Billy in an episode of the series “Dogs & Me“.

In the following year, Drew was cast to play Adam in the comedy series “Maron“, followed by his role as Doug in “Cassandra French’s Finishing School“ in 2017.

In the same year, Drew guest-starred in “Totally Megan“, and then in “We’re Not Friends“ (2018) before he made his big-screen debut that year as Kyle in the comedy movie “Secret Santa“, also starring Debra Sullivan and Michael Rady.

The same year, Drew wrote and starred in the comedy “If People Acted Like Dogs“, which was critically acclaimed, although it had no awards and nominations.

During all these years, Drew performed in comedy clubs all over the world, making comedy his full-time career. In November 2021, he released his first special entitled “Concussed“, which can be heard on streaming services.

Drew’s fans can keep track of his life and work through his social media accounts, and we could say that he already has an army of followers on his Instagram account, whose number counts nearly 850,000.

Drew launched his eponymous YouTube channel on 28 February 2012, and it’s today subscribed to by nearly 2.5 million people – all of his videos combined have gained over 100 million views. He mostly uploads videos featuring himself performing in various comedy clubs, and you can also watch his “Dog Vlog“ in which he talks about his life with his service dog.

The most viewed video on his channel is “Man Tries To Roast My Stutter And Fails“, which has been viewed nearly eight million times, and in which he explained what happened when he had an accident.

Drew was 20 years old, and a healthy youngster who enjoyed sports. He was playing softball (a game similar to baseball played with a larger ball) with his friends when he was hit in the throat by the ball, fell backwards and hit his head, but didn’t realize that he’d been concussed, so didn’t ask for medical help.

The ball damaged his vocal nerves, and without rapid treatment, his brain never recovered from the damage caused by the fall, so Drew is unable to speak normally even now. He suffers from a stutter or stammer, which is a speech disorder. Drew had a special therapy dog called Stella, that was trained to raise the alarm if Drew has breathing problems because of his throat injury, but sadly his dog died in January 2022.

However, his condition didn’t stop him fulfilling his dream, and his story is a true inspiration for many of his fans.

He's been on "America's Got Talent" and other shows and he might have a book coming out – but he's not sure. 😂@TheDrewLynch will perform this weekend at @LibertyComedy but first he stopped by GMC. https://t.co/ezdMnrmLba pic.twitter.com/xTuTUbdmoq

After his accident, he lost his self-esteem; the biggest support, besides his family, was his then-girlfriend, whose name he hasn’t shared, however, he spoke about her saying that she was the one who told him to sign for “America’s Got Talent“ audition. He also added: ‘My girlfriend took on three jobs so I could pursue my dreams’.

The two were together for a while after the show ended, but eventually broke up; Drew hasn’t shared the reason for their separation.

Sometime in 2017, he met his future wife, Melanie Sergeiv. She’s a soccer player, born in 1996 in the US, but of Bulgarian descent. The two haven’t shared how they met, but it’s known that they began dating on 16 November 2017. Drew and Melanie exchanged their wedding vows in June 2022; they don’t have children, but they do have a new puppy named Rakia.

Although he didn’t win “America’s Got Talent“, and so missed out on the $1 million prize, Drew has amassed a modest fortune from his work. According to sources, as of August 2022, his net worth has been estimated at over $2 million, earned largely from his stand-up comedy performances at around $30,000 per night, and he has an annual income from his YouTube channel of about $100,000.