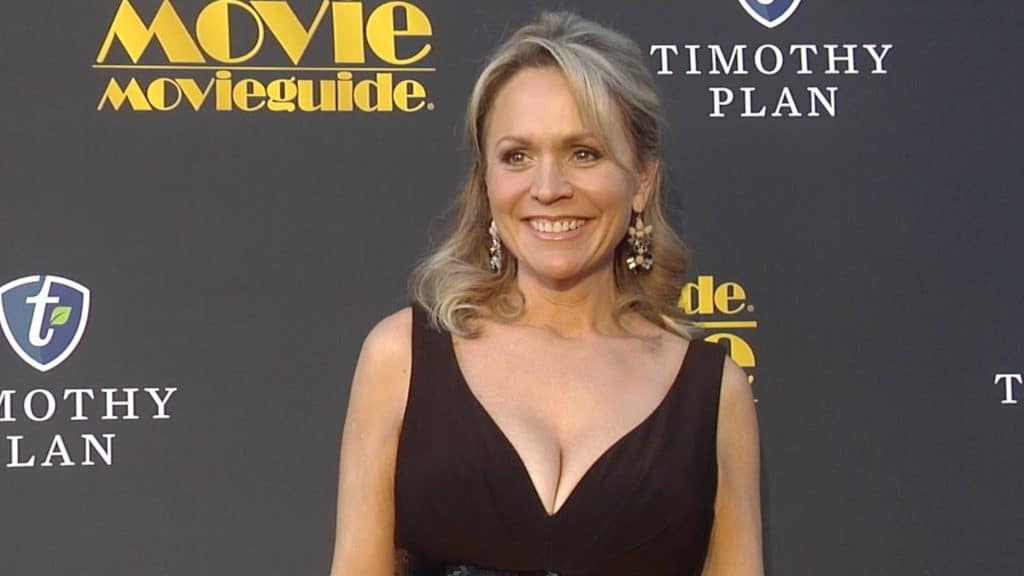 Who is Barbara Alyn Woods?

Barbara is an American actress, perhaps still best recognized as Deb Scott in the TV series “One Tree Hill” (2003-2012), and most recently as Mayor Michelle Cross in the TV series “Chucky” (2021-2022), in addition to other roles.

Barbara Alyn Woods was born on 11 March 1962 in Chicago, Illinois, USA. She is the daughter of Allen Woods, who was a salesman for Nunn Bush Shoes, while there is no information about her mother.

She went to Hinsdale South High School in Darien, Illinois, and then enrolled at Northern Illinois University after matriculation.

Barbara made her acting debut in 1988 with the role of Cheri in the TV series “Sable”, and the following year portrayed Kareen Brianon, personal assistant to Doctor Ira Graves, in the eponymous TV sci-fi action-adventure series “Star Trek: The Next Generation”.

The same year, she guest-starred in the Primetime Emmy Award-nominated comedy series “Married… with Children”, starring Ed O’Neill, Christina Applegate, and Katey Sagal, and before the decade ended, Barbara appeared in the Emmy Award-winning drama series “Hooperman”, and had a minor role in the short-lived comedy series “Open House”.

She started the ‘90s with the role of Yoyo in the sci-fi action-comedy film “Circuitry Man”, while in 1991, she was Julie in the thriller crime-drama film “Delusion”.

The following year, Barbara starred in the thriller film “Dance with Death”, co-starring Maxwell Caulfield and Martin Mull, while in 1993, she was the lead star of the romantic drama series “Eden”. The same year, Barbara appeared in Steve Kloves’s romantic mystery-drama series “Flesh and Bone”, with Dennis Quaid, Meg Ryan, and James Caan.

Next, in 1995 she appeared in the sci-fi fantasy comedy series “Dead Weekend”, while in 1996, she portrayed Lorelei in the award-winning comedy crime-drama film “Striptease”. Written and directed by Andrew Bergman, based on the book by Carl Hiaasen, it starred Demi Moore, Burt Reynolds, and Armand Assante.

Barbara was chosen for the role of Diane Szalinski in the TV comedy series “Honey, I Shrunk the Kids: The TV Show” (1997-2000), co-starring Peter Scolari, Hillary Truck, and Thomas Dekker. The series was based on the film of the same name and expanded the story behind the film’s narrative as the clumsy genius whose shrinking experiment goes wrong. The series received positive reviews, and Barbara was praised for her work, significantly increasing her popularity and wealth.

After the end of the series, she continued her career rather successfully. First, she starred in the crime-mystery film “The Confidence Man” in 2001, co-starring Tommy Redmond Hicks and Jack Conley.

In 2003, she was chosen for another prominent role, this time as Deborah ‘Deb’ Scott in the TV teen comedy-drama series “One Tree Hill”.

Matthew also appeared in the Wilmington-themed movie Port City with John Wesley Shipp (Mitch, DC) and Barbara Alyn Woods (Deb, OTH). Wilmington, of course, is where DC and OTH were filmed (and where I live).

Deb is the mother of Nathan Scott, the main school jock, and was a main character in the first four seasons and again in season six, while she guest starred in seasons five and nine. Her character battled drugs and alcohol addictions throughout the show, and had troubles with several on-screen characters. However, in her last appearance on the show, she consoled her son’s girlfriend after he had gone missing and got to say goodbye to her ex-husband, Dan, before his death.

Concurrently, Barbara didn’t pursue many other projects, but appeared in the television film “The Wild Card” (2004) and in Andy Brown’s comedy film “Port City” (2009).

She’s slowed down her career since the second half of the 2010s and appeared only in a few projects, including the biopic about a teenager who is an upcoming rodeo star but suffers a paralyzing spinal cord injury, but who didn’t give up on her career and tried to get back on the horse just months after the injury. The stars of the film included Barbara’s daughter Alyvia Alyn Lind, Spencer Locke and Missi Pyle, among others.

Recently, she was cast as Mayor Michelle Cross in the award-winning thriller-horror series “Chucky”, co-starring with Alyvia again, and other stars included Zackary Arthur and Bjorgvin Arnarson, among others.

As of late 2022, Barbara Allen Woods’s net worth is estimated at $2 million, earned through her successful acting career, during which she’s appeared in over 50 film and TV series.

The couple has welcomed three daughters, Natalie, Emily and Alyvia, all involved in the entertainment industry.

According to sources, Natalie Alyn Lind’s wealth is estimated at $3 million as of late 2022.

Emily Alin Lind was born on 6 May 2002 in Brooklyn, New York City USA. Emily made her acting debut in 2008 as Young Lilly in the film “The Secret Life of Bees”, and enjoyed a successful career as a child actress, appearing in such TV series as “Eastwick” (2009-2010) as Emily Gardener, then “All My Children” (2010) as Emma Lavery.

According to sources, Emily Alyn Lind is worth $2 million as of late 2022.

Alyvia Alyn Lind was born on 27 July 2007 in Los Angeles, California, USA. She started her career at just four years old as Faith Newman in the soap opera “The Young and the Restless”, appearing in 281 episodes of the critically acclaimed series through 2021.

She has already made more than 25 film and TV appearances, and some of her most popular roles include Dolly Parton in the television movie “Dolly Parton’s Coat of Many Colors” (2015), then as Casey in the film “Masquerade” (2021), and most recently as Lexy Cross in the TV horror series “Chucky” (2021-2022).

A dancer from a very early age, she started attending dance lessons at just six years old. During her high school years, she used her dancing skills as she was a member of the cheerleading squad.

Barbara is also known for her philanthropic work, and has worked with a number of charitable organizations, mostly donating money to benefit underprivileged children.