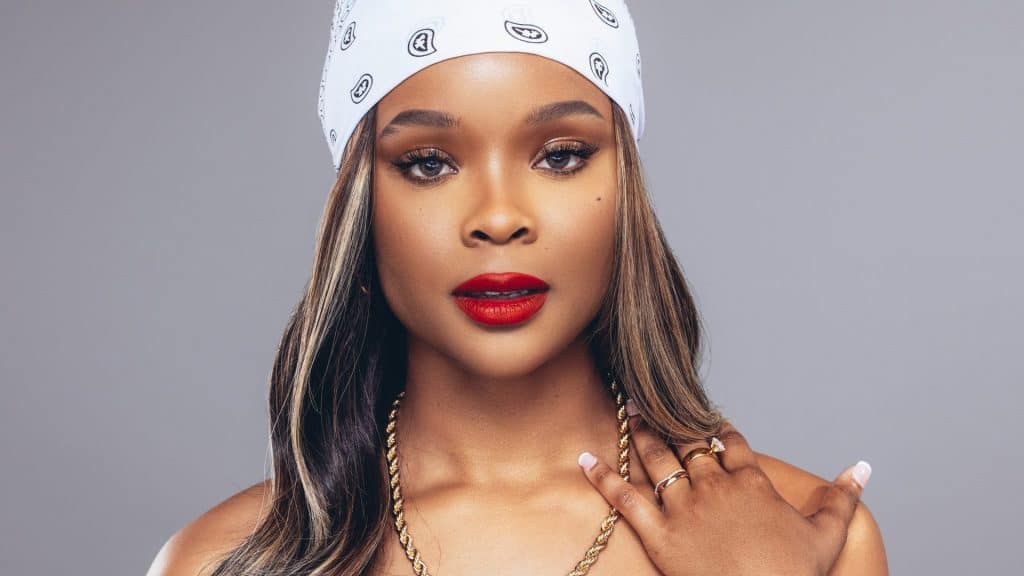 Born Ajiona Alexus Brown under the sign of Pisces on 16 March 1996, in Tuskegee, Alabama USA, Ajiona is a 26-year old African-American actress, singer, and social media personality, probably best known around the planet thanks to portraying characters in several well recognized Hollywood titles, such as “BMF.” She has enjoyed successes as both an actress and singer over the course of her often lucrative career in entertainment since 2010.

Ajiona was initially raised in her birthplace alongside her sister Dee Brown, though their family moved to Birmingham, Alabama in 1999, where she spent the rest of her childhood. She grew up with a significant interest in the dramatic arts, reciting her first monologue on stage at the age of eight. Her parents took note of this, and thrust her further into the limelight by signing her up for dance and acting classes. When she was in the seventh grade, she was accepted into the theatre department of Alabama School of Fine Arts. From where she matriculated in 2014, but didn’t then enroll into college.

Career: The best of three worlds

Alexus had been gaining acting experience at school for a few years, at the point when she got a standing ovation in the local theater play entitled “A Raisin in the Sun.” Inspired by the support, she started auditioning for roles in Hollywood, and in 2010 at the age of 14, landed the part of Tyra in Henderson Maddox’s action drama film entitled “Unspoken Words,” opposite Robin Givens and Lisa Nanette Allender, which was eventually released in 2014. Although it was released earlier, Robin’s second onscreen performance was as De’Anna in 24 episodes of the comedy TV series entitled “The Rickey Smiley Show,” from 2012 to 2014. In the meantime, she also had the lead role of Chelsea Mason in the much less popular TV mini series “Chelsea’s Way” from 2013.

In 2015 she played Keesha Platt in an episode of “Code Black,” and much more importantly, Marissa McKay in an episode of world renowned “Grey’s Anatomy.” In the same year she also played Noelle in Mark Harris’ romance drama entitled “My First Love”, and 2016 saw her as Ruth Quinn Robinson in Greg Galloway’s family drama “Bad Girl” opposite Rhoda Griffis, and more significantly, as Teenage Loretha in 11 episodes of “Empire,” in which she’d appear through 2019.

Ajiona started 2017 in the lead female role of Allison Cross in “Something Like Summer,” and continued the year in one of her most significant performances thus far – Sheri Holland in 18 episodes of the highly acclaimed mystery thriller TV series by Brian Yorkey entitled “13 Reasons Why,” opposite Dylan Minnette and Katherine Langford.

2018 was by far Ajiona’s most successful year to date, seeing her in three film and two TV series roles, including Candace Preston in nine episodes of “Light as a Feather,” Livvie in six episodes of “Runaways,” and Jasmine Russell in the high grossing thriller action film by James McTeigue entitled “Breaking In.” She took a break in 2020, ultimately appearing as Kato in eight episodes of Randy Huggins’ crime biopic TV series entitled “BMF” – “Black Mafia Family” – in 2021, opposite Tyshon Freeman and Christian Robinson. In early 2022, she showed up as Shawna Wilson in Lynne Stoltz’s drama “Sons 2 the Grave”, and Ajiona’s most recent acting credit is the lead female role of Nia in Taj Stansberry’s romance musical entitled “Mission Street,” which is still in pre-production in mid-2022, her 18th acting credit.

The voice of the face

The actress also ventured into music, releasing the mixtape “Radio Ready” on 30 June 2012, followed up by the promotional single “Dream Big” in 2013. In 2015, Alexus dropped “Best Friends” on the air, in which music video she also starred. Later, on 29 June 2017, she released the “Dream Big” mixtape as well. In 2020 she was featured in the video of her own single, “Body,” as well as “Give Love On Christmas Day” under Cameron Dean’s directing. Her most recent musical project is the single “Same Mistakes” from 2021, which also came with a music video featuring her.

She uses her massive Instagram page of almost 1.5 million followers to promote both of her careers.

After her success in “13 Reasons Why,” Ajiona was subsequently cast in “Breaking In”, and promptly interviewed by collider.com about the experience. When asked about what she was most excited to do on the set, she said ‘I think I’m always nervous because I want to do so well, but it’s not nervous being scared. It’s just more that I’m so excited that I’m nervous because the excitement overwhelms me. I was just happy to be part of a project with new people.’

Love life: Who is Ajiona’s boyfriend?

Alexus has mostly been mum about her private life, leaving the media completely in the dark about any romantic involvements. As far as the public is concerned, since her Instagram page offers absolutely no clues, the Hollywood star is currently single, and not interested in anyone. She is thought to reside alone somewhere in Los Angeles, California.

What is Ajiona Alexus’ net worth and salary?

As of August 2022, Ajiona Alexus’ total accrued wealth is estimated by most credible sources at over $1.5 million. She’s gathered this sum thanks to over 12 years of an entertainment career, which intertwines popular Hollywood titles with well known songs of her own making, as well as a big Instagram page that’s quite viable to advertisers. While her salary from particular projects isn’t known, there’s the fact that “Breaking In” had a budget of $6 million, but grossed over $50 million worldwide. She also starred in “Acrimony,” which took $20 million to produce, but gained over $45 million across the globe.